A surplus with consequences

Why do healthy cells become malignant and proliferate uncontrollably? Scientists of the University of Würzburg have investigated the role of a special protein in this process and settled and old controversy. 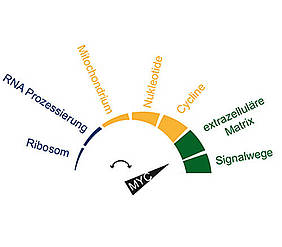 As its concentration increases, the protein Myc activates an increasing number of genes in cells. Beyond a certain level, this causes the cell to transform into a tumour cell. (Graphic: Elmar Wolf)

The transcription factor Myc has two faces: On the one hand, the protein is indispensable for cell growth and division. On the other hand, it is prevalent in virtually all cancer cells – however in a much higher concentration. So it is obvious to suspect Myc of playing a key role when cells turn cancerous. However, there have been conflicting theories as to how this process takes place in detail.

Study at the Biocenter

A new study conducted by Würzburg scientists now presents what's going on inside cells in a new light. According to the study, high levels of the Myc proteins are the prerequisite for tumour genesis. The study was conceived at the Department of Biochemistry and Molecular Biology (Chair: Prof. Dr. Martin Eilers) of the University of Würzburg; junior team leader Dr. Elmar Wolf is in charge of the study.

"We studied cells that have both a very low level of Myc and are well understood in terms of molecular biology," says Elmar Wolf. The scientists gradually increased the Myc level in these cells and subsequently investigated the consequences. They then validated their findings in real tumours.

The concentration regulates the function

"According to previous doctrine, the transcription factor Myc activates a number of genes which are responsible for cell growth and division," Wolf explains. As in the intestine for example: The cells of the intestinal mucosa have a very short life-span due to the harsh conditions prevailing there. Therefore, the cells of the intestinal epithelium are continuously renewed about once a week – which is a straightforward process when Myc levels are normal. But when excessive amounts of Myc are produced in a cell, these genes are also much more active, transforming the cell into a tumour cell – so the previous notion. A view not shared by Elmar Wolf: "In reality, the processes are much more complex."

Actually, Myc not only regulates the expression of known genes in tumour cells. Wolf and his team were able to demonstrate that the protein binds to other genes as its level increases and enhances their transcription. "In normal concentrations, Myc binds to certain genes with a high affinity. As the concentration rises, however, it also regulates genes with a low affinity," Wolf explains the principle. Depending on the concentration, the scientists found different gene regulation patterns that each trigger different processes.

"High affinity": This includes genes that control cell growth and division. "Low affinity": These are genes regulated by Myc that control processes which promote other aspects of tumour growth. "For example, the tumour must be supplied with nutrients in order to grow. To do so, it needs blood vessels," Wolf explains. And Myc only binds to the genes responsible for creating new blood vessels once it has reached a high level in the tumour cell.

Migration is another example of such a process Myc triggers by activating low-affinity genes. It enables tumour cells to migrate to other parts of the body and create metastases.

The observation that Myc has a different impact in healthy persons (regulating the expression of genes with a "high affinity") and in tumours (regulating the expression of genes with a "low affinity") opens up new fascinating possibilities in tumour therapy according to the scientists: "If there was a drug to inhibit the function of Myc, our study suggests that there should be a dose that would curb the tumour-promoting properties of Myc while preserving important functions of Myc for the healthy tissue," says Elmar Wolf.

Unlike standard chemotherapy drugs that target rapidly dividing cells, as are found in the intestinal mucosa, such a therapeutic approach would drastically reduce the side effects of treatment. At present, however, no such drugs are available to inhibit the function of Myc. But international researchers are working feverishly to achieve this goal.

Dr. Wolf: You have published your new study in eLife and not in a well-known journal such as Nature or Cancer Cell as in the past. Why did you choose to do so? eLife is equally a prestigious journal that has a good reputation among scientists. But it is still relatively young.

What distinguishes eLife from traditional journals? For example, the editors don't work for profit and demand no fees – neither for publishing nor for reading articles. As an author, I am also completely free as regards the usability and accessibility of my work. For example, I can forward it to other people or put it on my website to make it accessible to the public. Moreover, eLife has no permanently employed editors who preselect the articles and may base their decisions on other grounds than scientific ones.

But eLife hopefully has some kind of filter mechanism in place? Of course, they have. But these people are scientists who are still working actively. Their focus is on "science excellence".

And what about the renown? eLife puts the focus on science and not on maximising the impact factor. I submitted our work with them, because I believe that the whole concept is right and deserves support. 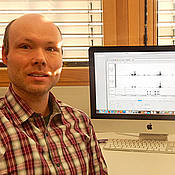