Coffee: better harvest thanks to biodiversity

Bees, birds, and bats make a huge contribution to the higher yields produced by coffee farmers around Mount Kilimanjaro – an example of how biodiversity can pay off. 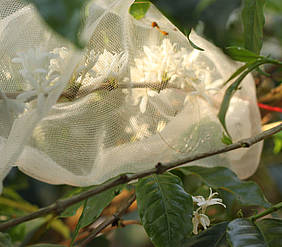 A lot of coffee is grown on Kilimanjaro, the East African massif almost 6000 meters high. The most traditional form of cultivation can be found in the gardens of the Chagga people: there the sun-shy coffee trees and many other crop plants thrive in the shade of banana trees and other tall trees.

However, the majority of the coffee is grown on plantations. Although these also have many shade trees still, they are being chopped down in ever greater numbers. The reason for this is that “conventional coffees, which rely on shade, are increasingly being replaced by varieties that tolerate lots of sun and are more resistant to fungi,” explains Professor Ingolf Steffan-Dewenter, a tropical ecologist at the University of Würzburg's Biocenter.

The hope is that this crop intensification will lead to higher yields. However, it is possible that the harvest on the plantations will be no better in the end: the very fact that there will hardly be any shade trees left there will mean that the habitat may become scarce for animals that pollinate the coffee, eat pests, and thereby help to improve the yield.

Approach taken by the researchers

Steffan-Dewenter and his doctoral student Alice Classen therefore wanted to know what contribution bees, birds, bats, and other animals make to pollination and to biological pest control in the coffee fields. They also wanted to find out whether intensified farming has an impact on these free services provided by the ecosystem. They worked closely on this with teams from the LOEWE Biodiversity and Climate Research Centre (Frankfurt/Main) and the Institute of Experimental Ecology at the University of Ulm.

The tropical experts conducted experiments in all three cultivation systems (Chagga gardens, shade plantations, and sun plantations) in twelve areas on the slopes of Mount Kilimanjaro in Tanzania. They used nets to deny animals access to the coffee blossoms or even to entire coffee trees. Then they examined, among other things, how the presence or absence of the “animal service providers” affects the quantity and quality of the harvest.

Role played by animals in coffee-growing

It was revealed that where birds and bats had access to the plants, there was almost a ten percent higher fruit set. “We believe that this is down to the fact that the animals destroy pests that would otherwise feed on the coffee plants,” says Julia Schmack (Frankfurt). This reduction in leaf damage probably leads to fewer coffee cherries falling from the tree before they are ripe.

Looking at pollination was also interesting. Bees and other insects should actually be redundant here, since the examined coffee variety, Coffea arabica, can also self-pollinate. Yet, the researchers found that if pollinators have access to the coffee blossoms, the cherries are around seven percent heavier, which signifies that the coffee is of higher quality.

“So, the effects of pollination and pest control complement each other perfectly; both are important for higher yields,” says Steffan-Dewenter: Birds and bats provide more cherries; bees and other pollinators ensure better quality.

Same effect with all cultivation systems

To the surprise of the researchers, intensified farming does not have a negative effect: the impact that the services provided by the animals had on the harvest was equally good in all three cultivation systems, even in the sun plantations.

“We put this down to the mosaic landscape structure on Mount Kilimanjaro with its gardens, forests, and grasslands,” says the doctoral student, Alice Classen. Given that much of the landscape is divided into small parcels, pollinators, birds, and bats could still find a sufficient habitat with nesting places and swarm out from there into the plantations.

“However, it is likely that these seemingly stable ecosystem services rest on shaky foundations in the sun plantations,” believe the Würzburg scientists. This is because they registered virtually only one type of visitor to the blossoms there: honey bees.

On the coffee blossoms in the Chagga gardens, on the other hand, they also sighted wild bees, hoverflies, and butterflies. So, if honey bee numbers were to fall, as they might in a year that is climatically unfavorable for these insects, this could reduce the harvest in the sun plantations.

Findings of a DFG research group

These findings have been published in the journal “Proceedings of the Royal Society B”. They have been produced by a research group that focuses on the ecosystems of Mount Kilimanjaro and is funded by the German Research Foundation (DFG).

Homepage of the DFG research group 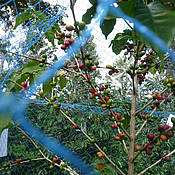