Once again, a generous EU research grant goes to the University of Würzburg. Biochemist Katrin Paeschke is being given a renowned Starting Grant of around EUR 1.5 million for her research by the European Research Council (ERC). 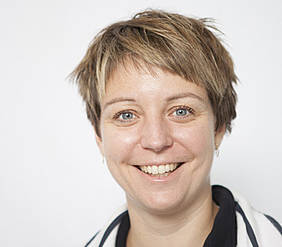 The focal point of Dr. Katrin Paeschke’s research is an exceptional fold of DNA which can also be found in human genetic material. Paeschke is interested in the impact that this structure has on the stability of the genome. “It is argued that these structures have a positive influence on our genetic material but also, because of their stability, cause damage to our genetic material, which is observed in, say, cancer or other genetic diseases,” says the scientist.

Paeschke will be able to step up her research in future. In recognition of her work to date, the European Research Council (ERC) has promised her an ERC Starting Grant, amounting to some EUR 1.5 million, which it awards to promising young researchers. She will receive this funding over five years.

Genetic material, DNA, is present in every cell in the form of a double helix and is wound around proteins, packaged, and folded specifically. “A special fold of our genetic material can be created in regions that feature a high share of guanine, a building block of DNA,” explains Paeschke. This special fold is referred to by scientists as a G-quadruplex structure. These G-quadruplex structures resemble knots; they can occur in certain areas in the genome and have an impact on biological processes there.

Paeschke has been researching such structures for a number of years now; she has managed over various experiments to show that these folds exist in cells and that certain motor proteins are essential for unwinding these knot-like structures. Without these motor proteins, known as helicases, damage is sustained by the genome in these areas.

Katrin Paeschke has been working in Würzburg for a good three years. In February 2012, armed with a grant of around EUR 1.4 million from the Emmy Noether Program run by the German Research Foundation (DFG), she switched from Princeton University in the USA to the University of Würzburg’s Biocenter, where she established her own research group at the Department of Biochemistry.

Sights set on the genetic material of baker’s yeast

Using baker’s yeast as an example, the scientist is focusing mainly on DNA replication, i.e. the process whereby genetic information is duplicated. Given that, in many cancer cells, dysregulation occurs particularly during this phase, the formation of G-quadruplex structures here is especially important. They stop the process and therefore slow down cell growth, which is a desirable effect in cancer treatment.

The step from baker’s yeast to human is not as big as you might think since many processes, functions and the make-up of the cell in humans and yeast are similar, explains Paeschke. The findings regarding processes in yeast are therefore transferable. In addition, research on the genetic material of yeast offers a number of benefits: the genome of yeast is easy and efficient to manipulate, while the work is cost-effective and raises no ethical concerns.

Katrin Paeschke (born in 1979) grew up in Monheim am Rhein. Between 1999 and 2001 she completed a foundation course in biology at the University of Bonn, before switching to biochemistry for the advanced stage of her studies. For her doctoral studies she attended the Institute of Cell Biology at the University of Witten/Herdecke. In 2006, she obtained her doctorate after writing a thesis on “The in vivo regulation of the telomere complex”. From March 2007 until her move to Würzburg in 2012, she conducted research as a postdoctoral fellow at the Department of Molecular Biology at Princeton University (USA).

Number of applicants and grant winners

As the European Research Council announced a few days ago, 328 scientists from 38 different European countries were awarded a Starting Grant in this year’s application round. Germany heads the statistical table with 70 researchers with funding, followed by the UK (55), France (43) and the Netherlands (34). A total of 3,273 researchers had applied for support, with the share of successful female applicants rising from 30 percent last year to 33 percent this year, as emphasized by the Research Council. The “success rate” among female scientists is therefore almost as high as that among their male colleagues. EUR 485 million now flow from the coffers of the EU into this line of funding.

Target group for the funding

The objective of the Starting Grant is to give young scientists the opportunity to continue their research independently. This support is only available to young researchers with a promising scientific track record and an excellent research proposal.