Tumours of the nervous system: This is what a new project of the Würzburg cancer researcher Martin Eilers is about. The European Research Council has awarded him an “Advanced Grant” of about 2.5 million euros for this purpose. 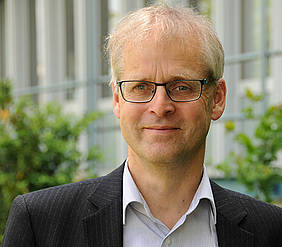 The biochemist professor Martin Eilers (54) researches the changes that turn normal body cells into aggressive cancer cells at the University of Würzburg. For years, one of the main focuses of his work has been the myc proteins: “We know that it is involved in the development of almost all tumours”, says the professor.

In healthy cells the myc proteins tie themselves to the genetic material and activate certain genes. However, in tumour cells they are present in an “overdose” and cause the proportion to go out of balance: They then switch on very different genes than in normal cells - and this has fatal consequences, because it fuels the growth of cancer cells.

If the myc proteins could be slowed down or switched off, this could maybe result in new therapies for cancer patients. One problem is: “So far, we don’t know how the myc proteins really work and why exactly they play such an important role in the development of cancer”, says Eilers.

Subgroup of the myc proteins at a glance

In a new project, Eilers concentrates on a subgroup of the myc proteins, the neural myc proteins. These cause tumours of the nervous system, for example, neuroblastomas - life-threatening tumours that mainly develop in the abdomen - often in very small children.

The neural myc proteins have to first connect with a different protein (Aurora A) in order to develop their sinister effect. “The aurora protein can be inhibited, respective substances are known which have also already been tested in the USA”, says Eilers. Nevertheless, it is still not yet known why the neural myc proteins need aurora as a partner. This is exactly what the professor wants to find out.

2.5 million euros for the “AuroMyc” project

Eilers can tackle his project with an “Advanced Grant” from the European Research Council (ERC). The ERC awards these grants to established top scientists in Europe according to a strict selection procedure.

Eilers will receive 2.5 million euros for his “AuroMyc” project. This will also finance three new scientist positions in his team. The scientist from Würzburg has taken biochemist professor Richard Bayliss from the University of Leicester (England) also on board as a partner: “The colleagues there are experts for aurora; we in Würzburg are experts for myc.”

Eilers received the German Cancer Award in 2004 for his successful research. He was furthermore accepted as a member of the European Molecular Biology Organisation (EMBO) in Heidelberg in 2006.

Facts about the ERC grants

ERC grants are the most prestigious European economic grants. They are very highly remunerated and enable the award recipients to tackle comprehensive projects. The European Research Council has awarded the grants in different categories since 2008. There are starting grants for “promising young researches”, consolidator grants for “particularly promising research talents” and the advanced grants for “established top scientists”.