How plants can grow on salt-affected soils

The increasing salinisation of soils is a major problem for farmers worldwide. Scientists of the University of Würzburg have now examined how plants regulated their salt intake. Their results could be significant to breed more salt-tolerant species. 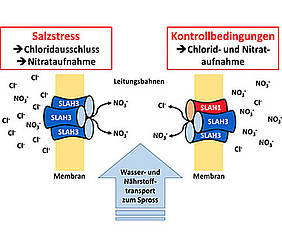 It is common knowledge that salt consists of the cation sodium and the anion chloride. However, the substance used to season food has been a cause of great concern to farmers for some time now: In times of climate change, more and more agricultural areas have to be irrigated. This inevitably leads to the increasing salinisation of soils, that is the accumulation of sodium and chloride ions.

Plants that grow on such soils usually have a hard time. And that is for a reason: Higher doses of chloride have a toxic effect on plant development. In contrast, they need the anion nitrate as an essential source of nitrogen to build proteins and multiply their DNA. The Würzburg plant scientists Dietmar Geiger and Rainer Hedrich have recently studied whether and how plants are capable of distinguishing between the nutrient nitrate and the harmful chloride. They present the results of their research in the current issue of the renowned journal Current Biology.

Elongated cells that pervade the plant body like a system of tubes conduct water and nutrients from the roots into the shoot. Specialised cells inside the roots load nutrients absorbed from the soil onto this conducting system. In these loading stations, the Würzburg researchers detected the two anion channels SLAH1 and SLAH3 which are responsible for regulating the passage of nitrate and chloride.

In cooperation with the Spanish working group of Dr Colmenero-Flores, the scientists studied genetically modified plants in which SLAH1 or SLAH3 is missing. The sap of these mutants ascending to the shoot through the plant's vascular system only contained half the amount of chloride ions. The nitrate content, however, remained unchanged. Hence, the researchers concluded that both anion channels regulate the entry of chloride into the shoot.

To pinpoint the anion filter in charge of nitrate in the channels, the researchers next took a closer look at the channel molecules. For this purpose, they measured the anion current through SLAH1 and SLAH3 directly using biophysical methods. "We found SLAH1 to be incapable of conducting anions in the first place and SLAH3 to mainly conduct nitrate," Professor Rainer Hedrich describes the unexpected result.

In the course of further studies, the scientists found the explanation for their strange finding: "The alleged contradiction between the nitrate and chloride contents in the sample plants and in the mutants was resolved when we brought the two anion channels together," Professor Dietmar Geiger explains. It turned out that the two channels form a functional complex. "Each time SLAH1 enters into the complex, the anion filter in SLAH3 will switch from nitrate to chloride and vice versa," Geiger further.

Where does this switch play a role? The Spanish colleagues delivered the answer to this question. In order to determine the identity of the chloride-nitrate switch in the plant, they simulated salt-affected soils to the plants. The higher the salt load the roots of the sample plants were exposed to, the more SLAH1 was withdrawn from the anion channel complex. Hedrich: "In this process, the chloride-conducting complex gradually evolves into a nitrate-conducting status." This allows the plant to maintain its intake of nitrate as a vital source of nitrogen without taking damage by the salinisation-related increase in chloride concentration.

With their studies on the salt tolerance of plants, the Würzburg plant scientists Dietmar Geiger and Rainer Hedrich together with their colleagues from Seville and Riyadh have demonstrated a wholly new concept of anion intake regulation in the vascular tissue of the roots. According to the researchers, the discovery of the regulatory anion channel SLAH1 will not least have an impact on optimising the salt tolerance of crops in the future.