A bacteria genus living in marine sponges produces so many natural substances that scientists are classifying it as a potent source for new drugs. The bacteria are presented in the journal “Nature”. Würzburg researchers were involved in describing them. 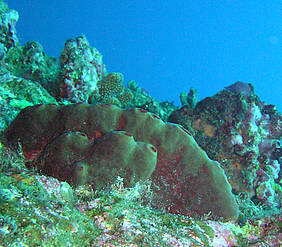 Many medications that are used to treat cancer or infectious diseases, for example, contain substances derived from bacteria and other microorganisms. Marine sponges play an important role in the search for new drugs from the natural environment. This is because they contain exceptionally diverse and unusual natural substances.

Now an international venture coordinated by Professor Jörn Piel from the Swiss Federal Institute of Technology in Zurich (ETH Zurich) has broken new ground in this area. The scientists have discovered the origin of the many interesting substances found in the sponge Theonella swinhoei: they are produced by the bacteria genus Entotheonella, which lives in the sponge as a kind of lodger.

Tectomicrobia as a new bacteria group

Since the newly discovered bacterium is so unusual, the researchers were unable to assign it to a known group in the conventional system. They are therefore proposing a new strain (phylum), which they are calling Tectomicrobia.

The name Tectomicrobia is derived from the Latin word “tegere”, which means “to hide, to protect”. This term was chosen because the bacteria cannot be cultivated in the laboratory yet and are therefore “well hidden” from science. Furthermore, they presumably protect their host sponges, with the many substances they contain, from fish and other predators.

Habitat in sponges and sea water

Würzburg’s Professor Ute Hentschel-Humeida, expert in the microbiology of marine sponges, and her colleagues Dr. Susanne Schmitt and Christine Gernert were involved in describing the new bacteria. The Würzburg team also conducted studies into the distribution of the new strain. “Tectobacteria can be found in many other sponges, and also in sea water,” says Hentschel-Humeida, which points to their ecological relevance.

As their next step, the research teams are keen to discover what functions tectobacteria perform in symbiosis with their host sponge as well as in the coral reef ecosystem. They will also strive to make the bacteria’s chemical arsenal available for research and for possible biotechnological applications.