Search for the key to the mRNP code

Eighteen new priority programs were recently approved by the German Research Foundation (DFG); one of these will be coordinated by scientists from the universities of Würzburg and Cologne. Its goal: To answer outstanding questions about the conversion of the information of a gene into a protein. 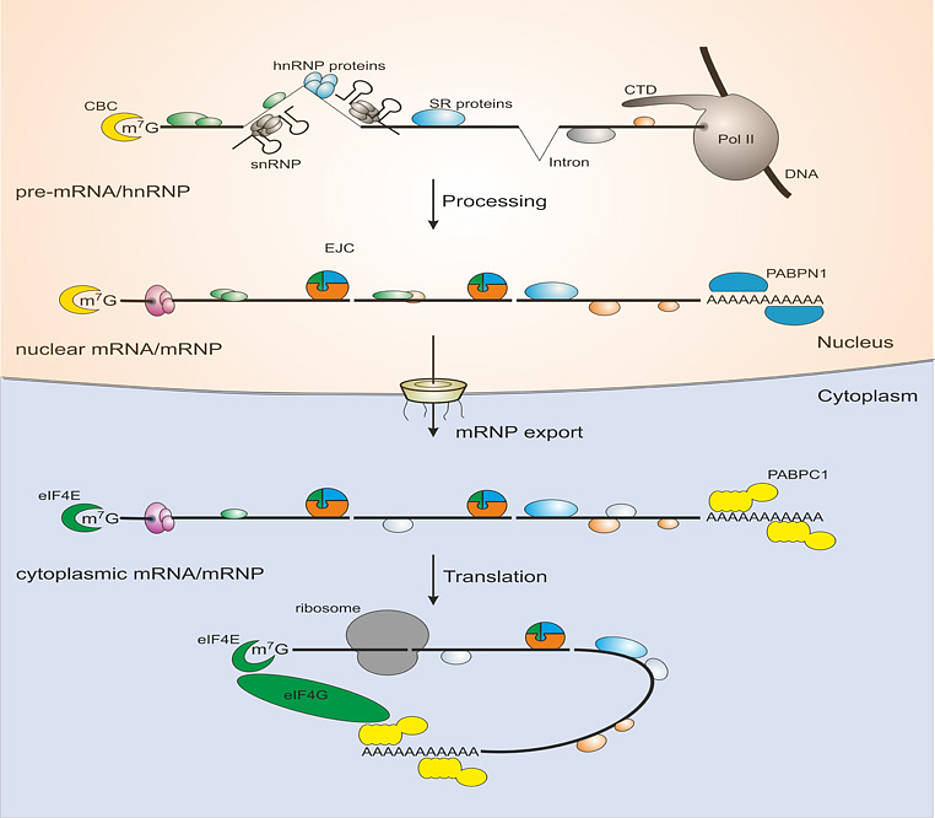 In principle, the issue sounds simple: Every gene encodes a protein. To transport the information from inside the cell, where the DNA lies, into the cell plasma, where the proteins are synthesized a “messenger” is used, known as messenger-RNA, or mRNA for short. This creates a kind of copy of the gene concerned and delivers the building plan for the required protein.

In reality, this process is far more complicated: “The mRNA is never naked but covered in numerous proteins, which themselves assume certain functions,” explains Professor Utz Fischer. Around 1,000 such proteins are known today, according to Fischer. They may adhere to the strand of mRNA in different combinations, forming an “incredibly complex network”. mRNP, or messenger-ribonucleoproteins, is the name given to these complexes formed between mRNA and associated proteins.

Utz Fischer runs the Department of Biochemistry at the University of Würzburg. Together with his colleague, private lecturer Niels H. Gehring from the University of Cologne, he submitted an application to the DFG for a new priority program to be set up to examine this network. Success: Fischer and Gehring are among the 18 new programs now approved by the DFG. They are coordinating the project entitled “Deciphering the mRNP code: RNA-bound Determinants of Post-transcriptional Gene Regulation”.

According to the DFG, priority programs should “investigate fundamental scientific questions in particularly topical or emerging areas of research”. The level of interest here is high: The DFG committees had to choose from 87 concepts this time; only 18 – in other words, 20 percent – were successful. These will have access to around 105 million euros in total during the initial funding period over the next three years; around six million euros of this will go to the program that will be coordinated by Fischer and Gehring. As a rule, priority programs are funded for six years.

How proteins communicate with each other

“If a copy of a gene is created in the form of an mRNA, this does not necessarily mean that the respective protein will also then be synthesized,” explains Utz Fischer. In fact, it is the proteins adhering to it that decide when the mRNA will be used, in what quantity proteins will be produced, how long the strand will work for, and where it will be active. They are therefore essentially responsible for enabling cells to react quickly to changed environmental conditions, such as surprise changes in the event of an illness or perfectly regular ones during the development of the organism.

To achieve this, these proteins need to communicate with one another as well. The fact that they do so is already known; but the specifics of this communication remain largely unclear. The fact that this process is subject to a degree of dynamism also complicates the research: “The mRNP code changes dramatically over the life of the mRNA,” says Fischer. It is also, however, prone to error that can be medically relevant. “Defects in segments of mRNA, but also in proteins that interact with it, are a common cause of many different diseases in humans,” says Fischer. Known examples of this are neurological disorders, such as schizophrenia or Fragile X syndrome.

The announcement of the new priority programs also marks the start of a new selection procedure. At present no decision has yet been made on who will join Fischer and Gehring in trying to unravel the complex network of proteins and mRNA strands. Scientists from all over Germany will have an opportunity over the coming months to submit funding applications to the DFG. These will then be “evaluated in a rigorous review process to determine their scientific quality and their contribution to the general topic in question,” as the DFG states. So, not until the end of this year will Fischer and Gehring know precisely how many groups and projects they will actually coordinate. Fischer is anticipating 15 to 20 research teams from various different disciplines – from biology to structural biology and biochemistry, right through to bioinformatics.

These will then address a further unresolved mystery in relation to the mRNP code: Among the 1,000 or so proteins known to date, which attach themselves to the mRNA strand, there are numerous enzymes that have yet to form a complex with it. “It is unclear why they interact with the mRNA and, above all, what they do with it. We are expecting a few surprises here,” says the biochemist.

Six years will probably not be enough, the scientists say, to uncover all the details of the mRNP code. But Fischer is certain that they will succeed in “making good progress”. The rapid development of new technologies will play a part as well, he says. With the help, for example, of next generation sequencing and large-throughput analyses, science is now in a position to produce huge quantities of data within a short time that can then be processed by bioinformaticians.

“If we are able to understand the mRNP code, this will complete our knowledge of gene expression regulation”: Utz Fischer is convinced of this. At the same time, he says, this knowledge will have a significant impact on biomedical research. In his opinion, one should not be put off by the fact that this is an extremely complex problem. “It may end up being simpler than first thought.”