What do flies know of time?

Flies, too, remember the time of day, as scientists from the University of Würzburg found out in a series of experiments. However, several requirements have to be satisfied in order for the flies to form a memory. And under certain circumstances this mechanism does not work at all. 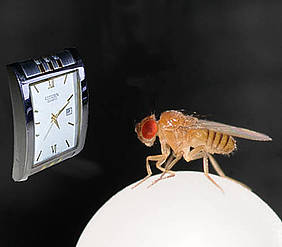 Does the honey bee know to set out for the marsh-marigold at 8 a.m. to arrive in time for the plant to open its flowers? And is it aware that it makes little sense to visit Oxalis before 10 a.m., as the flowers are closed until then? Or put differently: Do insects form time-specific memories or do they merely adapt to the special conditions of collecting food from a permanent site?

These and other questions were at the heart of a series of experiments conducted by scientists of the Rudolf Virchow Center and the Biocenter of the University of Würzburg to investigate whether flies are capable of remembering the time of day. Professor Martin Heisenberg and his colleague Nitin S. Chouhan were in charge of the project. They report on the results of their research work in the current issue of the journal Current Biology.

Two days of training followed by a test

"We used Drosophila melanogaster, the fruit fly, for our experiments," Martin Heisenberg explains. For two days, starved flies were trained in the morning and afternoon to associate distinct odours with food reward. On the third day, it was tested whether the flies had developed a time-dependent odour preference. The result was clear: "Flies tested in the morning preferred the odour presented to them in the morning in connection with the food. If the tests were conducted in the afternoon, the insects were interested in the odour they had learned in combination with the food received in the afternoon," Martin Heisenberg sums up the experiments.

The ability to remember the time of day is, however, limited in flies. One limiting factor is, for instance, the time between "odour experiments". The two training sessions have to be at least four hours apart in order for the flies to form time-specific memories. No training effect was observed for shorter periods of time.

The researchers also investigated whether an external time cue, daylight for example, suggested the appropriate time to the insects. For this purpose, the flies were exposed to a normal day-and-night cycle of 12 hours of daylight followed by 12 hours of darkness. Only on day three, the testing day, they left the light out. But even in complete darkness, the insects exhibited the time-related memory learned in the days before. The same happened when the flies were both trained and tested in constant darkness. Under one condition, however, no learning effect was observed: when kept under constant light conditions around the clock.

"These findings clearly show that insects such as drosophila have an internal mechanism that enables time-specific odour learning," Heisenberg says. In the next step, the scientists now want to look into the underlying neuronal structures and molecular processes.

The research results were obtained in a project of the Collaborative Research Centre of the University of Würzburg with the title "Insect timing: mechanisms, plasticity and interactions". Scientists with different biological backgrounds ranging from molecular biology to neuroethology and ecology collaborate to gain deeper insight into the "circadian clocks" of insects and the underlying mechanisms while shedding light on the consequences of timing on fitness in real ecosystems and in the context of changing global environmental conditions. Chronobiologist Charlotte Helfrich-Förster, Head of the Department of Neurobiology and Genetics, is the Collaborative Research Centre's spokeswoman.

Link to the homepage of the Collaborative Research Centre (http://www.sfb1047.uni-wuerzburg.de/en/home/)