Why biologists set up coloured soup bowls on Kilimanjaro and how this helps them find out that bees still live at an altitude of 4,550 metres and other interesting facts: New findings in biodiversity research. 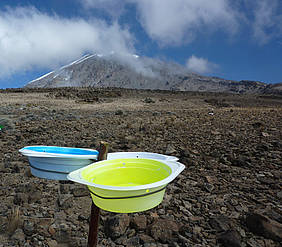 The detailed accounts Alexander von Humboldt (1769-1859) gave of his journeys already emphasised that biodiversity is not equally distributed on our planet. Whereas tropical rainforests exhibit a vast diversity in plant and animal species in a small area, moderate climate zones have less to offer with the variety of species decreasing towards the poles.

Why are the tropics so densely populated and the poles rather sparsely? Science has never been able to completely answer this question. To shed light on the issue, a team of the University of Würzburg's Biocenter has travelled to Mount Kilimanjaro in Tanzania, the highest free-standing mountain in the world (5,895 metres).

What makes Kilimanjaro interesting to research

What does Mount Kilimanjaro have to do with the biodiversity on our latitudes? "Quite a lot," says Professor Ingolf Steffan-Dewenter, head of the Würzburg Department of Animal Ecology and Tropical Biology: "When you climb a mountain, the temperature will drop with elevation at a rate of around six degrees Celsius per kilometre – that is about a thousand times faster than if you were moving from the equator towards the poles."

Other environmental factors that change only slowly along latitudes vary relatively quickly along differences in altitude – the productivity of ecosystems, for example. This makes high mountains virtual "experimental labs" that allow the factors determining biodiversity in our planet's climate zones to be studied at a small scale.

How to measure the diversity of wild bee species

The Würzburg scientists wanted to know which factors influence the diversity of wild bee species. Why wild bees of all species? "Wild bees are among the most important pollinators of our ecosystems. Their diversity in the tropics is still manageable for us. And their food resources, nectar and pollen, are defined quite clearly compared to other insects. This makes wild bees great subjects for study," bee expert Steffan-Dewenter explains.

The scientists used simple plastic soup bowls to determine the diversity of bee species at Mount Kilimanjaro. Sprayed with blue, yellow or white paint that reflects the light, the bowls attract bees which think they are flowers and fly right into the trap containing water and soap. The soap reduces the surface tension of the water so that the insects sink to the bottom of the trap.

"If you work in the tropics, the simplest methods are often the best," explains Andreas Hemp, an Africa specialist of the University of Bayreuth. "Expensive equipment cannot be left unattended, whereas painted bowls at best attract some curious schoolchildren."

Where the researchers set up the insect traps

The scientists installed the painted bowls at 60 study sites in total on Kilimanjaro three times in two years. Half of the sites were only accessible after hours of marching. The highest location was 4,550 metres above sea level, exactly at Mount Kilimanjaro's limit of vegetation.

"You tire more quickly at such heights," Alice Claßen, a doctoral candidate, recalls. "And what is more, the mean annual temperature up there is only about three degrees Celsius. The dry season was most challenging physically: on some days we had to carry the water for the traps up the mountain. This is only possible if you work in a team and with the help of great field assistants."

The painted bowls were left in their respective locations for 48 hours each. During that time, the researchers collected key data regarding temperature, precipitation, number of flowers and intensity of land use at the respective sites of study.

What the scientists found out

It was worth the effort: In the end, the research team successfully demonstrated that the biodiversity of bees declines continuously with increasing altitude. They were greatly surprised to find a specifically adapted species of apex-burrow bee (Lasioglossum, Halictidae) still living at an altitude of 4,550 metres.

However, matters become more complicated when we look at the temperature. High temperatures as found in tropical zones increase the speed of speciation processes, for example, by increased rates of mutation or ecological mechanisms. But given the fact that Mount Kilimanjaro is rather young in geological terms, higher speciation rates there are insufficient to account for the whole pattern of biodiversity.

How the use of resources depends on temperature

The researcher demonstrated that it is actually the combination of temperature and resources that plays a major role: "We found temperature to have a significant impact on biodiversity which was regulated by an increase in the populations," Peters further. "Moreover, we were able to show that bees visit fewer flowers when temperatures are low than when they are high, even though flowers are abundant. Hence, temperature seems to regulate the accessibility of resources and is therefore more relevant than the availability of resources." Surprisingly, this mechanism has hardly been taken into account by previous explanation approaches.

What is true for wild bees should at least apply to other poikilotherms, too. But it is possible that the biodiversity of homoeothermic animals, too, which frequently feed on poikilotherms, is regulated by the temperature-dependent use of resources. Although these findings have not completely answered the question of which mechanisms are actually responsible for regulating biodiversity on Earth, they have enabled us to add another piece of the puzzle to the overall picture.

These research results have been produced within the scope of the research group "Kilimanjaro ecosystems under global change" funded by Deutsche Forschungsgemeinschaft (DFG); Professor Ingolf Steffan-Dewenter is the group's spokesman. 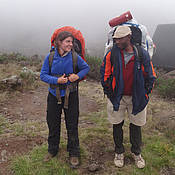