For childhood kidney tumors, scientists from Würzburg and Heidelberg have identified a series of previously unknown genetic causes. In so doing, they are paving the way for improved, customized treatment. 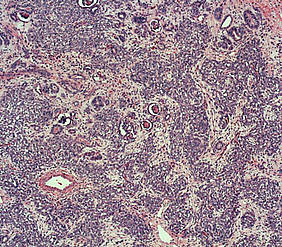 Wilms tumors, also known as nephroblastomas, are among the more common solid tumors in children. They tend to appear before the age of six and are categorized as embryonal tumors. The starting point in their development are kidney precursor cells in the embryo, which evidently do not mature as they should. Consequently, the tumor contains somewhat differing tissue structures, which is why the man who lent his name to them, Max Wilms, referred to “mixed tumors of the kidney” in his description in 1899.

In the search for the molecular causes of Wilms tumors and, in particular, the genetic culprits behind their high-risk variants, a group of scientists has now made a breakthrough. This collaboration involved teams led by Professor Manfred Gessler, chairman of the Department of Developmental Biochemistry at the University of Würzburg’s Biocenter, and teams led by Marcel Kool and Stefan Pfister at the German Cancer Research Center in Heidelberg as well as partners both within Germany and abroad. They present their findings in the current issue of the journal Cancer Cell.

“Previously, three genes were known to be possible triggers of Wilms tumors. We have now managed to identify a whole series of other causes,” explains Manfred Gessler. These include the genes DROSHA and DGCR8. If these are defective, this leads to a partial deactivation of the molecular machinery responsible for creating so-called microRNAs. MicroRNAs, for their part, are able to regulate the function of a large number of messenger RNA molecules and thus completely reprogram cells.

“With embryonic stem cells we already know that without microRNAs they are not capable of transforming themselves into cells of different tissues,” says Gessler. The same seems to be true of Wilms tumors: in their case, individual kidney precursor cells evidently do not manage to mature fully. Instead they remain in an embryonic state in which rapid growth is one of their fundamental tasks so that the kidney grows.

Alongside the microRNAs, two transcription factors also attracted the attention of the teams. The proteins referred to as SIX1 and SIX2 control the activity of other genes. Animal models had already made it clear that they are absolutely vital to the formation of the kidneys; they are also particularly active in Wilms tumors. “Our findings now reveal for the first time that both genes for these transcription factors are altered in Wilms tumors by mutations and, as a result, the cells remain in an embryonic growth mode in this case, too,” explains Gessler.

Third finding of the study: Tumor genes that are known to trigger other cancers may also be responsible for Wilms tumors. The scientists were able to show that a particular gene involved in the development of neuroblastomas – tumors that arise from degenerated immature cells of the sympathetic nervous system – is also activated in Wilms tumors. “This gives real hope that treatments that are successful for a neuroblastoma will also be effective for Wilms tumors,” says Gessler

In addition, some of the Wilms tumors demonstrated a deactivation of the most familiar tumor suppressor gene TP53, which led to dramatic genome changes accompanied by the fracture and uncontrolled loss or multiplication of chromosomal fragments. The prognosis for such degenerated tumors is particularly unfavorable.

The scientists involved believe that the new findings relating to the various triggers of Wilms tumors may help to improve treatment. Currently around 90 percent of children with the disease survive if they receive a combination of chemotherapy, surgery, and then further chemotherapy. The trick here is to identify patients with so-called high-risk tumors early and to treat them more intensively than cases with a low discernible risk of relapse. This technique should minimize the stress on the children and any possible consequential harm.

A histologic examination, routinely conducted these days, and the clinical picture provide important indicators here. But these are still not enough. “Clarifying the molecular causes offers hope of improving the classification of tumors and of being able to use increasingly targeted treatments within the framework of personalized medicine,” says Manfred Gessler.

However, with some of these genetic changes that have now been discovered it remains unclear how they contribute to tumor development. The aim of future work will mainly be to filter out from the abundance of candidates those that are best suited to predicting the progression of the disease, and to develop approaches for tailor-made treatments based on new knowledge relating to molecular networks.

For the study of Wilms tumors, the various disciplines of the teams involved complemented one another perfectly: The Würzburg team contributed years of experience in the analysis of Wilms tumors and one of the world’s largest collections of these tumors, which is housed at the Biocenter. The Heidelberg team, within the Heidelberg Center for Personalized Oncology (HIPO), provided extensive capacities and experience in high-throughput sequencing and genome analysis. The changes they discovered were then checked in Würzburg against hundreds of other tumors and their function examined.

Future work will require close collaboration with numerous pediatric clinics and pathologists as part of the German Wilms Tumor Study and with European partners, as this is the only way that it will be possible to collect and analyze sufficient material and data for such tumors successfully.

This work was supported by the Wilhelm-Sander-Stiftung foundation, the German Research Foundation, the Federal Ministry of Education and Research, and the HIPO initiative of the German Cancer Research Center (DKFZ-HIPO).