Chair of Biochemistry and Molecular Biology

Our research focus is the deregulation of protein turnover as a central driver in tumourigenesis.

E3 ubiquitin ligases are mutated or lost in a high proportion of human tumours. E3 ubiquitin ligases exert their function by regulating the protein stability of essential transcription factors, which also function as potent proto-oncogenes, like MYC, JUN, NICD1, CCNE1 and p63/∆Np63. We are interested in two main tumour types: lung- and colorectal cancer. By utilising in vitro and in vivo models we aim to understand the consequences of loss/mutation of key-components of the ubiquitination machinery and ways to counteract protein stability deregulation as a therapeutic approach.

Deubiquitinases, a novel class of molecules in the limelight:

We have been able to demonstrate that loss of the counterpart of the E3-ligase Fbxw7, the deubiquitinase (DUB) Usp28, is able to counteract Fbxw7-dependent tumour growth in an in vivo model of colorectal cancer. While the majority of potent oncogenes have proven to be elusive drug targets, the class of deubiquitinases, to which Usp28 belongs, has been successfully inhibited by small molecules. They are potent novel drug targets and of great interest for a wide range of diseases. Thus, investigating the E3-ligase-DUB crosstalk, exemplified by the Fbxw7-Usp28 axis, as a modulator of tumour initiation and/or growth is likely to be valuable in the development of future therapies. 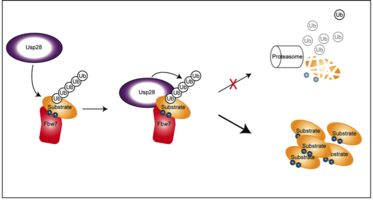 E3-ligases and DUBs in lung cancer

Lung cancer is the leading cause of cancer-related death in the world, claiming 1.59 million lives in 2012. Although survival rates for most cancer types have improved significantly over the past 30 years, there has been little improvement in the 5-10 year survival rate for lung cancer patients. This demonstrates how important it is to learn more about the development of this disease and to investigate novel therapeutic approaches.
Lung tumours are classified into two main groups according to morphological features, localisation, marker expression and genetic properties: non-small cell lung cancer  (NSCLC) and small cell lung cancer (SCLC). In recent years the main focus of lung cancer-related research has been towards NSCLC, which accounts for roughly 80% of all diagnosed lung tumours. NSCLC is not homogeneous, and can be further classified based on morphological features and differences in marker expression into Adenocarcinomas (ADC) (50%), Squamous Cell Carcinomas (SCC) (40%) and Large Cell Carcinomas (10%). Most mouse model systems were developed to model ADC. Surprisingly, although 30% of all lung tumours diagnosed are SCC, so far autochthonous and inducible mouse models of this tumour type are scarce

Using publically available genomic analyses of human NSCLC patient samples and comparing analyses of SCC and ADC tumours, we found that E3-ligases are frequently mutated in NSCLC together with mutations in p53 and the tumour drivers KRAS, EGFR and PIK3CA.

We combine conditional models with the use of ES-cells and novel techniques like Crispr/Cas9, to create human relevant models of complex diseases. We will explore the consequence of loss or mutation of E3-ligases in the lung, in combination with expression of different tumour drivers. This new model will provide a foundation for understanding lung cancer formation in molecular detail.

E3-ligases and DUBs in intestinal cancer:

Fbxw7 is the forth most commonly mutated gene in human colorectal cancer, and commonly co-occurs with aberrant Wnt-signaling. This is due to mutations in the E3-liagse APC (Adenomatosis Polyposis Coli Tumor Suppressor).  APC is required for regulation of the Wnt effector molecule -Catenin, while the stability of several oncoproteins, including MYC, is regulated by ubiquitin-dependent degradation mediated by the SCF (Fbxw7) ubiquitin ligase.

The activity of Fbxw7 is antagonized by the deubiquitinase Usp28, which is highly expressed in murine and human intestinal cancers. Usp28 inactivation in the intestine ameliorated the hyperproliferation and the impaired differentiation observed in a model of Fbxw7-depleted colorectal cancer. Usp28 deficiency corrected the accumulation of Fbxw7 substrate proteins, including NICD1, JUN, and MYC. These findings suggested an unusually direct antagonism between an E3 ligase and a deubiquitinase, Fbxw7 and Usp28, in modulating intestinal homeostasis and cancer.

Recently, novel DUBs regulating MYC protein stability were identified. We are interested to exploit this novel finding in in vitro, by utilising intestinal stem- and tumour cell culture, as well as by using in vivo models to assess the capacity of this dual DUB crosstalk in colorectal cancer. 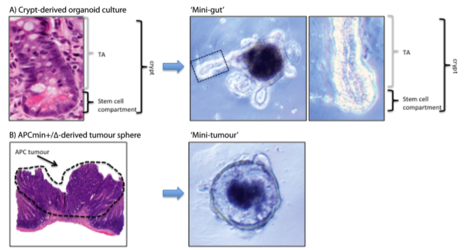