Many cancers display altered metabolic activity. Metabolic reprogramming in cancer supports the synthesis of macromolecules, which is a prerequisite for cell growth and proliferation. Altered metabolic activity enables cancer cells to survive under conditions of nutrient starvation and limited oxygen supply within the tumour microenvironment.

How oncogenes drive the metabolic activity of cancer cells

We are interested in understanding how oncogene activation or loss of tumour suppressor functions induces metabolic reprogramming in cancer. For this, we use inducible or isogenic systems in which we can selectively investigate the effect of individual components of oncogenic signalling pathways.

We have shown that the PI3-kinase/Akt/mTORC1 signalling axis induces fatty acid biosynthesis in normal and cancer cells via activation of SREBP transcription factors (Porstmann et al. Oncogene 2004 and Porstmann et al. Cell Metabolism 2008). This is important for the induction of cell growth and for cancer cell survival (Lewis et al. Oncogene 2016). We are now investigating the mechanisms of regulation of SREBP and its contribution to cancer development.

Fine-tuning of metabolism in cancer cells

Cancer cells need to adapt their metabolic activity in order to generate sufficient energy but also provide substrates for biosynthetic reactions. The high rate of macromolecule biosynthesis makes cancer cells particularly vulnerable to perturbation and can be used for cancer therapy (Schulze and Harris, Nature 2012). We have shown that allosteric regulation of glycolysis by the enzyme PFKFB4 is important for the survival of prostate and colon cancer cells (Ros et al, Cancer Discovery 2011 and Ros et al. Oncogene 2017). We are now studying how PFKFB4 contributes to tumour development and which cellular processes are controlled by this enzyme.

We have developed systems to identify metabolic genes that are particularly important for the growth and survival of cancer cells using functional genomic RNA-interference screening. These techniques use either short-interfering RNA oligonucleotides or pooled libraries of short-hairpin RNA-expression constructs. Using these techniques, we recently identified ACSS2 and SCD as essential nodes in lipid metabolism (Schug et al. Cancer Cell 2015 and Peck et al. Cancer Metab 2016). We are now studying how these enzymes support cancer cell survival and interact with oncogenic signalling pathways. 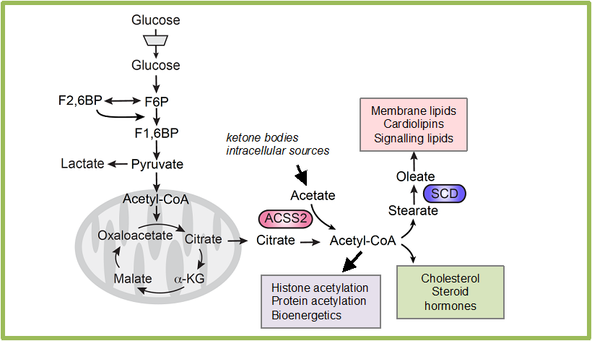 To support our studies on cancer metabolism, we have access to several state-of-the-art technologies. We run a Seahorse Bioanalyzer that is housed in a hypoxia workstation. We can also determine metabolite levels and metabolic fluxes using stable isotope tracing by mass spectrometry (LC-MS/MS).
We also apply different cell culture techniques to mimic the nutrient and oxygen conditions found in real tumours. For this we use a hypoxia workstation and culture cancer cells as 3D-spheroids, as tumour organoids (in collaboration with the Diefenbacher group) and under cancer stem cell conditions.