The timing of Drosophila development is strongly influenced by environmental conditions. When food is scarce or of low quality, animals prolong their larval stages (sometimes by many days). In this way, they try to compensate for the reduced rate of growth with an extended duration of the growth phase, to ultimately produce adult flies capable of surviving and reproducing in the wild.

The transitions between the different developmental stages, and hence the duration of the larval growth phase, are determined by the ecdysteroid molting hormones. Ecdysone is synthesized and released from the prothoracic gland (PG) in peaks that precede and control these developmental transitions. Of particular interest, an ecdysone pulse signals the end of the feeding period once larvae have reached a “critical weight”, and a few hours later another peak triggers pupariation.

The molecular mechanism by which the production of ecdysone is controlled is only partially understood. Our recent unpublished data imply an important growth regulator in this process: the transcription factor Myc. Here, we set out to determine the organ in which Myc acts to influence ecdysone activity, characterize the molecular targets that mediate Myc’s effect, and identify the natural conditions under which this Myc-dependent control is relevant. We expect that this research will uncover a novel molecular connection between the pathways controlling size and timing during insect development. 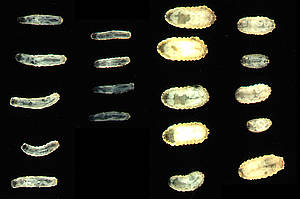