The fruit-fly Drosophila melanogaster has been extensively used as a model organism to understand the molecular mechanism of the circadian clocks, the location of the circadian pacemaker neurons, as well as input and output pathways that reach or come from the body oscillators and are translated in rhythmic behavioral phenotypes. Drosophila clock neurons are dispersed throughout the brain –some are located in the dorsal and others in the lateral brain (the Lateral and Dorsal Neurons, LN and DN;Fig. 1A).

There is a clear hierarchy among the groups of clock neurons, with the Lateral Neurons (LNs) playing a leading role for behavioral rhythmicity under constant conditions: the LNs are necessary and sufficient to maintain behavioral rhythms in absence of Zeitgebers. In the presence of Zeitgebers, the Dorsal Neurons (DNs) contribute equally to behavioral rhythmicity, whereby all groups seem to have different roles and properties. A mix of LNs and DNs controls predominantly the morning (M) activity of the flies, whereas another set of LNs and DNs controls their evening (E) activity (Fig. 1B). These various clusters of neurons communicate among each other via neuropeptides such us PIGMENT DISPERSING FACTOR (PDF) that is expressed by a subset of Lateral Neurons belonging to the M cells (Fig.1A). Moreover, some of the clock neuronal cluster are able to directly perceive light information from the environment via the blue-light photoreceptor CRYPTOCHROME (Fig.1A). Notably, the expression pattern of PDF and CRY varies among different Drosophila species and, in our eyes, seems to correlate with the environment each particular species had to adapt to.

We have found, for instance, that not all Drosophila species show M and E activity components (Fig. 1B). D. littoralis, D. montana, D. virilis and other Drosophila species living in the North show just one activity bout in the afternoon when temperatures are pleasant (Fig. 1C; Bahn et al., 2009; Kauranen et al., 2012). This behavior appears to be an adaptation to colder habitats and it seems that the loss of M activity in the Northern species correlates with no expression of the PDF and the blue light photoreceptor CRY within specific clusters of LNs (Fig. 1 A-C). To test this hypothesis we turned again our attention to D melanogaster and decided to use these well known (and very easy to manipulate) organism to alter its circadian neuronal network in order to modify its behaviour. For example (Fig. 1C) we are using RNAi intereference to specifically knock down PDF in subset of clock neurons and test how these changes interefere with the fly ability to adjust its locomotor activity to different day lengths.
In parallel, we are also looking at the behavior of different Drosophila species exposed to different environmental conditions. Some of the Drosophila species we are using are wild-caught (Fig. 2) so that we can compare among different Drosophila species living at the same latitudes or individuals belonging to the same species but that were able to adapt to a broad range of environmetal conditions. 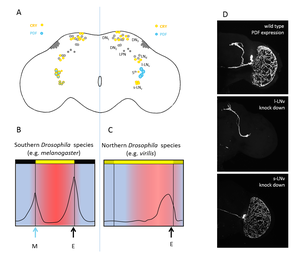 Fig. 1 The circadian clock of Drosophila

A: Schematic view of PDF and CRY expressing neurons in the brain of Southern Drosophila species like melanogaster (depicted in the left hemisphere) a Northern Drosophila species like virilis.
B: The locomotor activity of Southern and Northern Drosophila species appears quite different. Flies that live in the South have 2 activity bouts, one in the morning (M) and one in the evening (E), while those adapted to more Northern environments maintain only the E peak of activity.
In the upper part of the graphs, the yellow and black/grey bars represent the typical day-light that flies can experience in Southern versus Northern environments with relatively short days and dark nights in the South and really long days and quite luminous nights during the summer in the North.
The blue and red background instead symbolize the temperature changes that normally occur during the day in such environments; in the South we have very high temperature (red) during the day and it gets cooler (blue) at night while in the North temperature are generally lower and air gets warm and pleasant for the flies only in the second part of the day.
C: PDF immunostaining in whole mount brains of D melanogaster in which, through expression of dsRNAi via the UAS-GAL system, we were able to knock down the expression of the neuropeptide PDF in different subset of neurons. 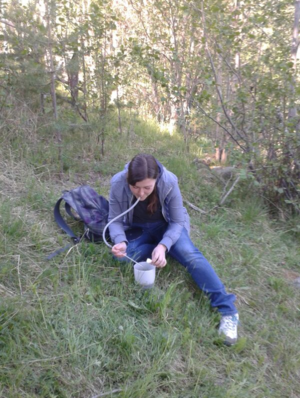