If on one hand the circadian clock of Drosophila melanogaster has been widely studied over the years, the molecular mechanisms and the neuronal organization of the clock of other insects are still largely unknown. We are interested especially in gathering information, both at the molecular and anatomical level, on the circadian clock of the honey bee Apis mellifera, given its incredible capability to orientate towards the sun in time compensated manner, but also of different ants species (belonging to the genus Camponotus, Cataglyphis, and Atta). So far we know that the molecular clock of these Hymenoptera is more similar to the mammalian one instead of to the one of fruit flies, but our knowledge of the neuronal network underlying the control of behavioral rhythms is still quite poor.

We are also interested in looking at the clock network of aphids (Acyrthosiphon pisum), other organism central to our collaborative research group. Aphids show a remarkable life-cycle with alternative phenotypes such as winged or wingless, parthogenetic or sexual morphs, requiring high plasticity at the genetic, physiological and neurobiological level. The production of sexual morphs is photoperiodically induced by decreasing day length in autumn. For measuring day length a circadian clock is needed.

We started our analysis of the circadian network in Apis and we found that the neurites of all ~20 PDF-neurons (Fig. 3A,3B) per medulla intermingle in a looped fibre tract that passes the region of the accessory medulla (aMe) and then spreads into several fibres that enter the optic lobe or the central brain. In contrast to other insects, we did not see a pronounced fibre network in the aMe suggesting that the latter is not well developed in the honey bee. A prominent PDF-fibre bundle always projected into the dorsal protocerebrum and terminated between the alpha-lobes and calyces of the mushroom bodies (MBs), neuropils involved in olfactory (and most likely visual) learning and memory. This finding suggests that PDF relays the relevant information about the time of the day to the MBs (Kolbe, Bloch and Helfrich-Förster, unpublished).

We also have very preliminary results on the organization of the PDF neurons in three different ants species: Camponotus floridanus (Fig. 3C), mus and rufipes. Differently from what observed for Drosophila, the PDF network does not evidently differ among the three different ants species and in all of them we can observe a cluster of neurons close to the aMe that send fibers to the dorsal protocerebrum and the optic lobe (medulla). While the fibers that innervate the dorsal brain are not as much developed as the ones of the honeybee, we can observe a high density of PDF fibers in the optic lobe.

Of course, we will need a much more detailed analysis to unravel the specific function that the PDF network fulfills in these organisms.

Fig. 3 The circadian clock of other insects 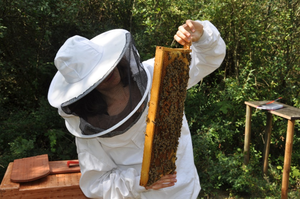 Our PhD student starting the day collecting bees for the experiments.