On Friday 01/31/2020 the Faculty of Biology held a ceremony in honor of Prof. Dr. Rappuoli on the occasion of awarding him the honory doctorate 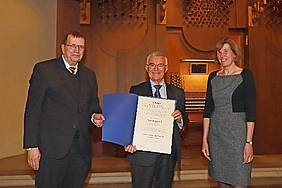 Prof. Rino Rappuoli ist one of the most renowned infection biologists and vaccinologists worldwide. After his studies in biology at the University of Siena, Italy, he worked as a scientist for Sclavo S.p.A. in Siena, a long established institute dedicated to the development and production of vaccines. After having held the positions of a chief executive officer of the vaccine business of Sclavo S.p.A., of the American Chiron Corporation and the Swiss Novartis, since a couple of years he is Chief Scientist & Head of External Research and Development (R&D) at GlaxoSmithKline (GSK) Vaccines. He also holds the position of a Professor for Vaccinology at the prestigious Imperial College in London.

Prof. Rappuoli has performed pioneering research in various fields of infection biology, e.g. in characterizing the pathogenic properties of etiological agents such as Bordetella pertussis, Helicobacter pylori and Neisseria meningitidis. In the field of vaccine development he introduced absolutely new strategies as exemplified by new acellular vaccines against whooping cough based on genetically detoxified toxins and by the so-called „Reverse Vaccinology“ approach with uses the genome sequence of an organism as the major source for development of new vaccines. The power of this revolutionary approach has been demonstrated by the ground breaking development of an effective vaccine against serotype B meningococci. In 2008 he founded the Vaccines Institute for Global Health in Siena, a non-profit institute dedicated to the development of vaccines especially for poor developing countries.

Prof. Rappuoli`s work has been distinguished manifold, for example he received the German Paul Ehrlich und Ludwig Darmstaedter prize (1991), the Italian Feltrinelli prize (2009), the Canadian Gairdner award (2017), the Inventor Award of the European Patent Organization (2017) and the German Robert-Koch prize (2019). He is an elected member of the National Academy of Sciences (USA), the Royal Society (UK), the European Molecular Biology Organization (EMBO), the American Society for Microbiology (ASM) and the American Academy of Arts and Sciences (AAAS).