The newly discovered dyscalculia mutant of the Venus flytrap has lost its ability to count electrical impulses. Würzburg researchers reveal the cause of the defect. 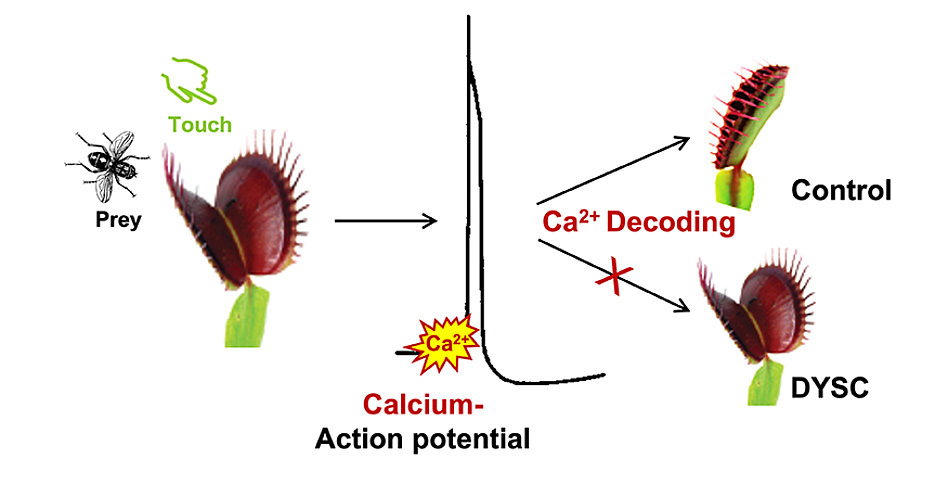 Stimulation of the Venus flytrap by touch triggers electrical signals and calcium waves. The calcium signature is decoded; this causes the trap to shut quickly. The DYSC mutant has lost the ability to read and decode the calcium signature correctly. (Image: Ines Kreuzer / Universität Würzburg)

The carnivorous Venus flytrap (Dionaea muscipula) can count to five: This discovery by Würzburg biophysicist Professor Rainer Hedrich caused a worldwide excitement in 2016. How does the plant count? Hedrich's team from Julius-Maximilians-Universität Würzburg (JMU) in Bavaria, Germany, has now described the key component in the journal Current Biology. The researchers found what they were looking for in a mutant of the Venus flytrap that has lost its counting abilities.

The Venus flytrap counts its prey

The Venus flytrap can survive in its very nutrient-poor home in the swamps of North and South Carolina because small animals are part of its prey spectrum. For this purpose, the carnivorous plant has transformed leaves into snap traps.

Both halves of the trap carry three to four sensory hairs each, which can sense touch even from very small flies like mosquitoes. However, the trap does not close at the first touch, but only at the second. So, it has to remember touch number one and close at lightning speed on "two".

But that's not all: if the captured prey animal continues to touch the sensory hairs, a genetically encoded programme is gradually called up at the third, fourth and fifth touch.

In this process, the hormone jasmonic acid is synthesised, the trap is hermetically sealed and digestive secretions are formed to open up the animal meal. And transport proteins are put in place. They later absorb the nutrients released from the prey into the body of the plant.

Each time the sensory hairs are touched, the Venus flytrap fires an electrical impulse, called an action potential, which spreads over the entire trap. The action potential is triggered by a calcium signal and carried by a calcium wave. "Counting is about measuring the individual calcium spikes and accounting for them for trap closure and prey processing," explains Rainer Hedrich.

The Dyscalculia mutant does not count

At a plant fair, Dr. Sönke Scherzer, co-author of the publication in Current Biology, discovered a Venus flytrap that does not close on "two" and does not process its prey on further touches. "This mutant has obviously forgotten how to count, which is why I named it Dyscalculia (DYSC)," says Hedrich.

Thus, the suspicion fell on a defect in the subsequent processes. The Würzburg researchers were correct in this assumption: after administration of the contact hormone jasmonic acid, the defect in rapid trap closure was not cured, but the processing of the prey, which depends on jasmonic acid, was restored. The DYSC defect was thus to be found in the decoding of the calcium signal.

This is where Dr. Ines Kreuzer came in. The molecular biologist and DYSC project leader looked for changes in the gene expression patterns after touch stimulation in the mutant.

"In doing so, we focused on the genes that were no longer correctly addressed by touch in the mutant," says the JMU scientist. In this way, the circle could be narrowed down to a few components operating as decoders within the calcium signalling pathway.

These potential calcium decoders have calcium-binding domains. After binding, they modify effector proteins. This includes the enzyme LOX3, which is important for jasmonic acid biosynthesis. The key component of the jasmonic acid-independent fast trap closure, on the other hand, is an anion channel activated by calcium.

How to identify the calcium decoders and their effector proteins? "To clarify this definitively, we are currently pursuing two directions," says Hedrich.

His team in the meanwhile has analyzed the genome of the Venus flytrap with high resolution, so that the researchers can look directly for gene modifications. In the second approach, they are looking at the proteins that are modified upon prey contact and changed in their activity. "In this way, we want to close the circle and find out what the plant does to distinguish numbers from each other, i.e. how it counts."