The medicine of ants

Biologist Dr. Erik Frank is researching how an African ant species treats its wounded. To continue his work, the German Research Foundation (DFG) has now granted him an Emmy Noether group.

A Matabele ant treats the wound of a conspecific with an antimicrobial substance. (Image: Erik Frank / Uni Würzburg)

The African Matabele ant (Megaponera analis) lives dangerously when hunting able-bodied termites. However, the animals do not simply give up their wounded. Depending on the degree of injury, they rescue and treat them. Injured individuals decide for themselves whether they will be helped. If a specimen demands rescue, it remains calm, releases pheromones, and allows itself to be carried back to the nest. Animals that are too badly injured, on the other hand, move frantically and boycott being “medevaced”.

But that is not all. Back in the nest, the paramedics become doctors and the ants treat potentially infectious wounds in a way that was previously only known from humans.

Erik Frank has been on the trail of insects since his master’s degree. As part of his doctorate at the Julius Maximilians University (JMU) in Würzburg, he had noticed that the ants licked the wounds of their injured victims – for example, severed legs. The hypothesis was that this behavior was intended to prevent infections. Possibly even antimicrobial substances were used.

A theory that has now apparently been confirmed: "We found out that injured ants communicate when a wound is infected," explains the biologist. "In the applied substances, we found over a hundred chemical components and 41 proteins. Of about half of them, we can already prove that they have antimicrobial qualities," he continues. These substances seem to be highly efficient; about 90 per cent of the animals treated survived their injuries. These findings stem largely from research that Frank recently conducted during his three years as a post-doc at the University of Lausanne.

According to this research, the ants produce the substances in a pocket-like gland in the rear area of the thorax; the so-called metapleural gland. The helping animal picks up these substances – either from itself or directly from the injured comrade – with its feet, takes them into its mouth and from there applies them to the injury.

So far unique in the animal kingdom

"What we are dealing with here is a complex system of diagnosis and correspondingly adapted treatment," explains Erik Frank. According to the current state of research, something like this is unique in the animal kingdom. Until now, it was assumed that only humans were capable of diagnosing infections and subsequently treating wounds with antimicrobial substances.

Now Erik Frank wants to expand his research and has returned to JMU to do so.

In Würzburg, he is setting up a research group as part of the Emmy Noether Program - budget over six years: about 1.3 million euros. His long-term goal is to establish wound treatment in the animal kingdom as a field of research in biology. First, however, it is important to successively expand the research. To this end, he is currently looking for two doctoral students, each of whom will conduct research on another topic from the world of ants.

During a stay in Mozambique, Frank noticed that the local population of Megaponera analis hardly suffered any injuries when hunting. The reason: "They hunt smaller termites, which are apparently not able to defend themselves effectively." If the ants were nevertheless confronted with injured animals in the experiment, there was no help. "Although they belong to the same species, they seem to have completely abandoned this behavior. One question now would be whether the ants still produce the substances used for wound treatment at all - or perhaps completely different ones."

The subject of the second project will be the Eciton driver ant, which is found in Central and South America. "Wound healing has also been observed in this ant. However, due to the duration of their raids of twelve to 14 hours, the Eciton ants do not bring their injured back to the nest but treat them directly on site."

The study of the antimicrobial substances produced and used could possibly even find substances that have a benefit for human medicine.

Expansion to other animal species

In the medium term, Frank can imagine conducting similar studies primarily with other insects. Bees or termites, for example, could be considered.

"Insects are particularly suitable for observation and experimentation," says Frank, "but such behavior could in principle be studied in all social animal species. For example, it has already been observed in chimpanzee mothers that they catch insects from the air, chew them up and then apply the saliva to the wounds of their offspring. It is not yet known whether the apes target specific insects. However, it cannot be ruled out that they make use of the very substances that ants, for example, produce to treat wounds.

The initial research results had already generated media interest in 2018. This seems to be increasing with the new findings. Most recently, Erik Frank was involved in the production of a well-known streaming provider that will dedicate screen time to the gifted insects as part of an upcoming documentary series. He will also be involved in two other planned projects by other major providers.

The Emmy Noether Program of the German Research Foundation (DFG) is aimed at postdocs and temporary junior professors in an early phase of their scientific career.

They are given the opportunity to qualify for a university professorship by independently leading a junior research group over a period of six years. 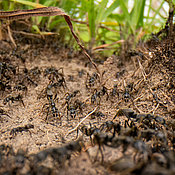 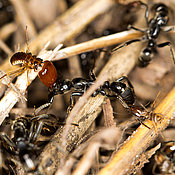 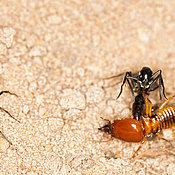