ABA: evolution of a plant hormone

Sex determination, dormancy, water balance: The phytohormone abscisic acid has branched out in the process of evolution. An international research team presents new insights on this subject in the science journal PNAS. 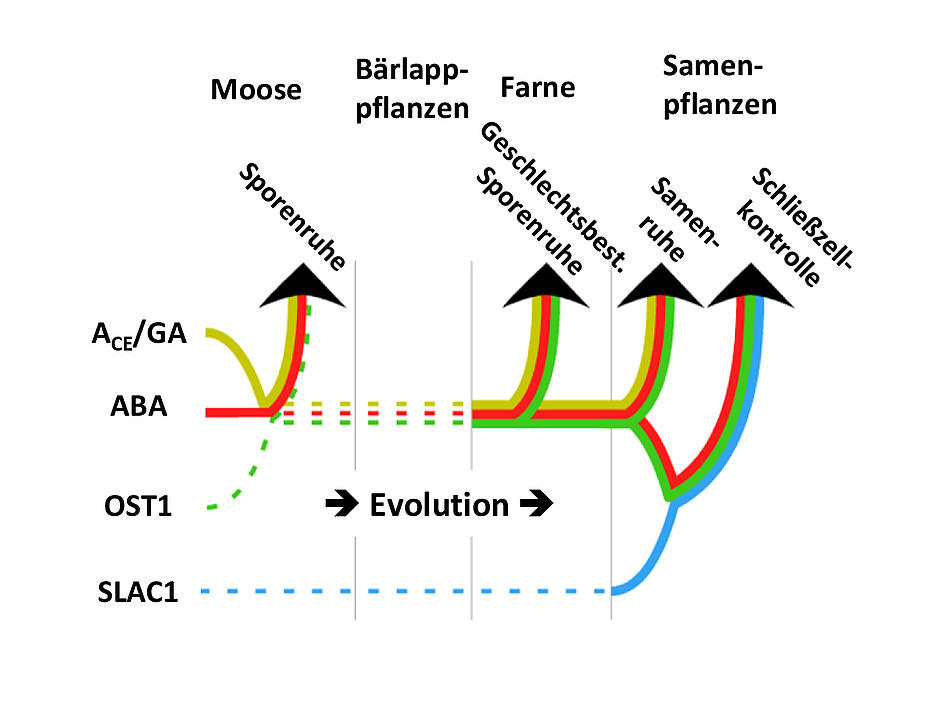 The function of the plant hormone ABA and the OST1 kinase regulated by ABA during the evolution of land plants (modified according to McAdam et al., 2016, PNAS).

As plants found their way onto land in the form of mosses far back in Earth's history, they were reliant on moist environments at first. But being confronted with occasional dry periods, they figured out how to survive in a desiccated state.

As ferns then entered the stage of life, they developed an impermeable waxy covering. Pores in the leaves soon followed allowing the plant to exchange carbon dioxide and oxygen with the environment. These pores close during dry conditions to prevent too much water from being lost through evaporation.

Early land plants were exposed to the evolutionary pressure of having to economise on water. "Especially the proliferation of ferns was obviously a 'test track' to find the optimal regulation of the leaf pores," says Professor Rainer Hedrich from the Julius-Maximilians-Universität Würzburg (JMU) in Bavaria, Germany.

This assumption is backed by new findings published in PNAS. Together with an international research team from Würzburg, Hobart (Australia) and Purdue (USA), Hedrich examined the pore regulation of land plants at an early evolutionary stage.

The experiments focused on abscisic acid (ABA), a plant hormone that regulates water balance and pore function in higher flowering plants. ABA is also essential for triggering dormancy. The researchers found that the hormone did not yet assume these functions in early land plants. Instead, the hormone played a key role in sex determination.

Although these three processes are fundamentally different, they all start out in the same way: The ABA hormone docks to its receptor and triggers the enzyme OST1 via a number of intermediate steps. In flowering plants, the enzyme even causes the SLAC1 anion channel to be activated in the leaves' guard cells, prompting the leaf pores to close.

In ferns this process is different: In Ceratopteris richardii, OST1 is crucial in determining the sex, but it is not capable of influencing the fern's water balance. "But if you introduce OST1 from a fern in mutants of the flowering plant Arabidopsis that lack OST1, it is capable of repairing the ABA signal damage there," Hedrich explains. The researchers found this result confirmed for Selaginella moellendorffii.

The next research steps

So the precursors of the flowering plants already have developed an ABA signal pathway with OST1, but do not yet use it to control their water balance. The key to understanding this phenomenon seems to lie in the SLAC1 ion channel. "In ferns, it is probably not sufficiently evolved yet to be activated by OST1," says Professor Dietmar Geiger, a JMU colleague of Hedrich.

Now they have to verify this assumption: How have the interactions between OST1 and SLAC1 changed as ferns evolved into the first flowering plants? To get to the bottom of this question, the Würzburg scientists now want to examine the level of OST1-SLAC1 interaction in plants of different evolutionary stages.