Ants operate a unique rescue system: When an insect is injured during a fight, it calls for help. Its mates will then carry it back to the nest for recovery.

A Matabele ant carries an injured mate back to the nest after a raid. (Photo: Erik Frank)

The African Matabele ants (Megaponera analis) are widespread south of the Sahara and are a specialised termite predator. Two to four times a day, the ants set out to hunt prey. Proceeding in long files, they raid termites at their foraging sites, killing many workers and hauling the prey back to their nest.

These attacks, however, are met with resistance and the ants get involved in fights with termites of the soldier caste. Injury and mortality can occur during such combats, as the soldiers are very adept at using their powerful jaws to fend off the attackers.

So the invasions bear an increased risk of injury. For this reason, the ants have developed a rescue behaviour hitherto unknown in insects.

When an ant is injured in a fight, it will "call" its mates for help by excreting chemical substances. The injured insect is then carried back to the nest where it can recover after receiving treatment. What is the "therapy" like? Usually, treatment involves removing the termites still clinging to the ant.

A german research team of the University of Würzburg's Biocentre has discovered this rescue behaviour of Megaponera analis and describes it in the journal "Science Advances". Erik Frank, Thomas Schmitt, Thomas Hovestadt, Oliver Mitesser, Jonas Stiegler, and Karl Eduard Linsenmair, all from the Chair of Animal Ecology and Tropical Biology, have participated in the research.

Rescuing the injured pays off

"We have observed helping behaviour vis-à-vis injured animals for the first time in invertebrates," says Ph.D. student Erik Frank. This was an unexpected finding, especially for social insects, where individuals are usually of little value. But obviously, it pays off for the colony as a whole to invest in the rescue service as the researchers demonstrate in their publication. 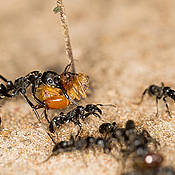 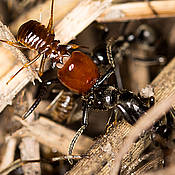