At present, an early diagnosis of the tumour-like crown gall disease affecting grapevines seems out of reach. Two researchers have taken a closer look at the tumours and found a very special environment. 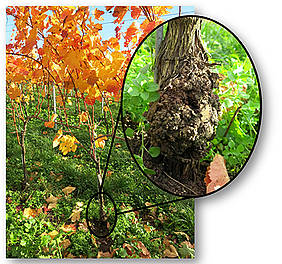 Visible to the untrained eye upon closer inspection only: a crown gall tumour on a vine. (Picture: Hanna Faist)

Wine growers and nurseries would benefit from detecting the dangerous crown gall disease in their vines before it breaks out. Such an early diagnosis is not available at present and cannot be expected soon.

This conclusion is drawn by Dr. Rosalia Deeken from the Biocenter of the Julius-Maximilians-Universität Würzburg (JMU) in Bavaria, Germany, and Professor Ute Hentschel-Humeida who worked here before relocating to Kiel. The scientists are convinced that the currently available methods are incapable of diagnosing crown gall disease reliably at an early stage.

Obstacles to a reliable early diagnosis

One reason: Infected by a handful of pathogens, the plant sap distributes the bacteria throughout the plant. So where to take a sample to assure an early diagnosis with a 100% reliable result? "In principle, one would have to sacrifice the whole plant for this purpose," says Deeken.

Another reason: Different variations of the highly sensitive polymerase chain reaction (PCR) that would theoretically be suitable to identify the bacteria are inappropriate because the pathogens are much too different genetically. The researchers made this discovery together with Dr. Alexander Keller of the JMU’s Biocenter, a bacteria specialist and expert in computation biology, using samples from five different sites in Lower Franconia.

Crown gall disease is triggered by the bacterium Agrobacterium vitis which causes tumour-like growths or galls at the vines. The yield decreases as a result and the vines die in the worst case. So far, no treatment for crown gall disease has been known.

"Therefore, nurseries and wine growers are extremely careful to produce and use only vines that are free from agrobacteria," Deeken further. This goal, however, is difficult to reach as the agrobacteria are capable of living hidden in the plant for several years before the disease breaks out. And without a method of early diagnosis, infected plants cannot be singled out in time.

The JMU biologists and doctoral student Hanna Faist also looked into the fundamentals of the vine disease. "We know from experience with humans that certain bacteria are capable of promoting the genesis and destruction of tumours," Deeken explains. The team therefore focused on the microbial community living in the grown gall tumours.

The doctoral student analysed the bacterial colonization of diseased and healthy vines during one growth period and compared the results. Keller's established method of high-throughput amplicon sequencing was employed for this purpose; the vines under examination were provided by the Bavarian State Institute for Viticulture and Horticulture in Veitshöchheim nearby Würzburg.

The results have been published in the journal of the American Society for Microbiology (Applied and Environmental Microbiology). They demonstrate that the microbial composition especially in the tumour tissue remains relatively stable throughout the seasons. However, the variety of bacteria in crown gall tumours is greater than in healthy vines.

In addition to the bacteria found in the healthy tissue, there are others that are exclusively detected in the gall tissue. These include types that migrate into the tumour as "opportunists", because it provides protection and nutrients. Others in contrast inhibit tumour growth.

The pathogen itself, however, does not need either the one or the other bacteria to generate the tumour. The scientists proved this on vines that had been cultivated sterilely on agar growth media provided by the nursery Rebschule Steinmann from Sommerhausen. An infection of the sterile vines with only Agrobacterium vitis was sufficient to trigger gall growth.

Deeken's conclusion: "Our study backs the assumption that crown gall tumours accommodate a very special bacterial community. On the one hand, the bacteria benefit from the tumour environment, and on the other hand, they keep the disease in check to a certain degree: "The tumour does not grow so large that most infected vines would die." Further investigations are aimed at studying the interactions between the different bacteria in the tumour.

The study received financial support from Deutsche Forschungsgemeinschaft (GK1342: A5 – Deeken, A8 – Hentschel/Riederer) and Universitätsbund Würzburg within the scope of the university sponsorship award of the Main-Franconian industry.