What genes enable plants to catch animals and digest them? Three genes have now been described for the Venus flytrap. They are responsible for the fact that the plant can use the vital potassium from its prey highly efficiently. 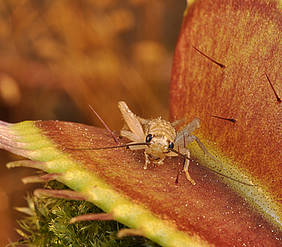 Carnivorous plants such as the Venus flytrap (Dionaea muscipula) grow in environments with extremely low nutrition. In order to survive there, they have specialized in the course of evolution: They obtain additional nutrition in the form of animals.

The Venus flytrap catches its prey with leaves that have been reshaped into traps. When insects touch particular sensory hairs on the trap, it closes very quickly and turns into a kind of green stomach: Glands emit a hydrochloric acid mix made up of digestive enzymes and apart from nutrients, minerals such as calcium, magnesium and potassium are also released from the prey. The plant then imbibes this additional meal through its glands.

PNAS publication of an international team

It is particularly potassium that is crucial for plants. Carnivorous plants need it urgently for the operation of its traps. An international research team has now found out just how efficiently the Venus flytrap obtains the potassium from its prey. The results have been published in the renowned PNAS journal.

Involved in the publication are the groups of the Würzburg biophysicist professor Rainer Hedrich and of the Göttingen neuroscientist and Nobel Prize winner professor Erwin Neher. They have collaborated with the professors Sergey Shabala (Australia), Heinz Rennenberg (Freiburg) and Khaled Al-Rasheid (Saudi Arabia).

First findings: The glands in the flytrap can only absorb potassium when an insect was really previously caught. Next, the scientists analysed the genes that were activated for absorbing the potassium. The result was that two potassium transporters and one enzyme, a protein kinase are increased. It is exactly those three that are also connected with “normal”, i.e. non-carnivorous plants in the absorption of potassium in the root.

This is what the interaction of the tree players looks like: The enzyme activates the two potassium transporters that take the entire potassium from the prey into the plant in one concentrated action. First of all the DmAKT1 transporter lowers the potassium level in the stomach of the Venus flytrap drastically, then the DmHAK5 transporter does the detailed work. “It has considerable pumping power and can still transport potassium into the gland cells when the potassium concentration there is already very high”, explains Sönke Scherzer, Hedrichs’ assistant.

On the quest for the potassium sensor

What the researchers want to find out next: How do the potassium absorption systems of the Venus flytrap notice that a potassium-rich prey, is sitting in the trap? Hedrich: “We have first indications that it is not the potassium that is initially released from the prey but rather contact to the sensory hairs that initiates the new synthesis of the transporters”.

The following still has to be checked: How is the potassium concentration measured in the green stomach? How does the protein kinase receive the signal that it has to switch on both transporters? This potassium sensor that still has to be identified, would also have to switch the potassium absorption system off again when there is no more potassium in the stomach, guesses Hedrich: Then the trap opens again and is ready for the next catch.

Funding by the European Research Council

Hedrich drives the research of the Venus flytrap and other carnivorous plants forward with high-level funding: The European Research Council (ERC) has granted the Würzburg plant scientist an “Advanced Grant” of over 2.5 million euros in 2010 for this purpose. In the “Carnivorom” ERC project, Hedrichs’ Team is in search of genes that makes plants into carnivores. 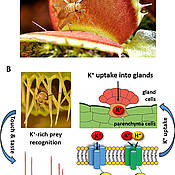