Microscopy: Nine at one blow

Advance in biomedical imaging: The University of Würzburg's Biocenter has enhanced fluorescence microscopy to label and visualise up to nine different cell structures simultaneously. Unique: Nine different cell structures were fluorescence labelled at once to become distinguishable under the microscope. (Picture: Thomas Niehörster)

Fluorescence microscopy allows researchers to visualise biomolecules in cells. They label the molecules using fluorescent probes, excite them with light and use the fluorescence thus triggered to get a microscopic image of the cell's structures.

"A major difficulty in this process is to clearly distinguish the many fluorescent probes that are often quite similar to one another," says Thomas Niehörster, a doctoral student of Professor Markus Sauer at the Department of Biotechnology and Biophysics of the Julius-Maximilians-Universität Würzburg (JMU) in Bavaria, Germany.

What the new strategy is based on

To make progress in this field, the scientists have devised a new strategy. For excitation of the probes, they now use three alternately pulsed lasers of different wavelengths (blue, green and red). Additionally, they benefit from differences in the probes' emission spectrum and the slightly different fluorescence decay patterns over time in the range of a few nanoseconds.

This test setup delivers complex data which the scientists analyse using their own software. The entire process is called sFLIM (spectrally resolved fluorescence lifetime microscopy) and seems to work flawlessly: "It enables us to distinguish the fluorescent probes with unparalleled accuracy," Professor Sauer says.

What the method is capable of

This approach allows five fluorescent probes to be distinguished with each of the three lasers, resulting in 15 different structures that could theoretically be visualised at the same time.

In practice, however, the scientists have to settle for less: "It is difficult to label so many different cell structures at once, and there is only a limited number of probes to do so," Niehörster explains. "Nevertheless, we managed to label and visualise nine different structures simultaneously." This includes, for instance, the F-Actin protein structure of the cytoskeleton, the nuclear membrane or newly created DNA.

The method's high sensitivity moreover allows using the same fluorescent dye to label three different cell structures at once that can be distinguished clearly afterwards. This is because fluorescence properties vary slightly depending on the chemical environment in the cell and become distinguishable as a result.

Cooperation with science and industry

This result was accomplished through a partnership of the JMU Department with the University of Göttingen (software) and the company PicoQuant in Berlin (hardware architecture). It was published in the scientific journal "Nature Methods". 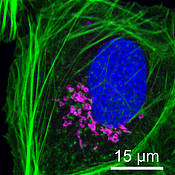