An international team of researchers has unravelled how the highly inflammatory giant cells arise. Researchers of the Würzburg Institute for Human Genetics participated in the project. Their findings will help develop more efficient therapies for immune diseases that are difficult to treat. 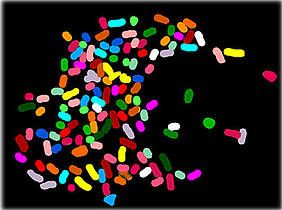 Spectral karyotype of a metaphase of a macrophage treated with a synthetic bacterial lipoprotein. A normal cell contains exactly two copies of each of the chromosomes dyed in different colours. (Photo: Dr. Indrajit Nanda, Würzburg Institute for Human Genetics)

Granulomatous diseases affect several million people worldwide. They cause among others inflammations of the lungs, intestine or blood vessels and are characterised by small nodes, the so-called granulomas. These nodes are a collection of tightly clustered immune cells, especially of multinucleated macrophages. Because of their size, they are also referred to as giant cells. Previously, scientists had assumed that multinucleated macrophages are formed when multiple cells fuse.

An international team of scientists managed by Dr. Antigoni Triantafyllopoulou from the Freiburg University Hospital has now found a wholly different explanation. The Institute for Human Genetics of the University of Würzburg participated in the project. They report on their work in the prestigious journal Cell.

The researchers were able to show that the giant cells are caused by cell division defects where the genetic material and the cell size are duplicated, but the cell does not divide subsequently. The body develops such giant cells in response to genome damages. Dr. Indrajit Nanda, a research fellow at the Würzburg Institute of Human Genetics, has directly visualised the multiplication of the genetic material in macrophages of developing granulomas.

Granulomas can form in response to persistent infectious or inflammatory stimuli which the organism is unable to eliminate. A current therapeutic standard treatment of non-infectious granulomatous diseases is hence to suppress the patients' immune system with drugs. This, however, also increases the risk of infections. The scientists now hope that the results of their study will trigger the development of new therapies that can prevent granulomas to become a new aspect of treating granulomatous diseases.