Inhibiting a protein called Sclerostin could probably help treating the bone-loss disease osteoporosis. New findings at the university of Würzburg could stimulate this research. 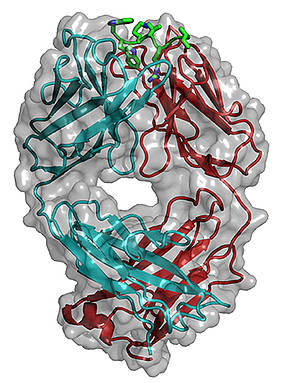 Model of a Sclerostin-fragment (green) bound to the antibody AbD09097 (heavy and light chain in cyan and red, respectively; surface representation in grey) (Figure: Thomas Müller)

Osteoporosis particularly affects elderly women: the bone’s structure weakens and the risk of suffering fractures rises. As prophylaxis patients are advised to have a healthy diet and perform physical exercises; when the risk of bone fractures is high, medicine preventing further bone loss is prescribed in addition.

In the search for better treatments for this disease the protein Sclerostin, which plays an important role in bone metabolism, is of major interest. When its function is impeded, bone resorption diminishes and bone re-growth is stimulated. First clinical trials with a Sclerostin-inhibiting antibody developed by the companies Amgen and UCB showed promising results in that the bone mass of participants suffering from osteoporosis increased. Currently, studies are continued at several locations, amongst others Würzburg, Munich and Dresden.

Verena Boschert, Postdoc in the team of structural biologist Prof. Thomas Müller at the Julius-von-Sachs Institute (Julius-Maximilians-Universität Würzburg, JMU, in Bavaria, Germany) is also working on the protein Sclerostin. In a collaborative project with several project partners and funded by the European Union and the Deutsche Forschungsgemeinschaft novel Sclerostin-inhibiting antibodies were generated and analysed for their suitability as osteoporosis treatment option.

Now, for the first time the JMU scientists crystallized an antibody effective against Sclerostin and analysed its mode of action in detail. Recently, these results were published in the journal Open Biology. “Our findings could have a positive impact on the design of new inhibitory antibodies targeting Sclerostin”, says Boschert.

In this project the scientists from Würzburg are working together with partners from industry. In cooperation with AbD-Serotec, having its German subsidiary in Puchheim, ten promising antibodies were developed in the initial round. After testing in cell culture one (AbD09097) showed the favoured activity to neutralize Sclerostin.

Together with the company Pepscan (Lelystad/ The Netherlands) and the Leibniz Institute for Pharmacology in Berlin an in-depth analysis of the binding epitopes was performed using peptide chemistry and NMR spectroscopy. From these methods the binding site of the antibody in Sclerostin could be deduced.

Further steps in the project

”Until now, we could only determine the structure of the antibody alone “, Boschert points out. As the next step it is planned to crystallize the antibody together with Sclerostin or a binding fragment. Thereby, a more detailed view of the interaction between antibody and its target will be obtained.