Why is spider silk stronger than steel?

Web spiders produce silk threads that are, based on their mass, stronger than steel and at the same time much more elastic. These remarkable properties raise the interest of engineers and basic researchers. 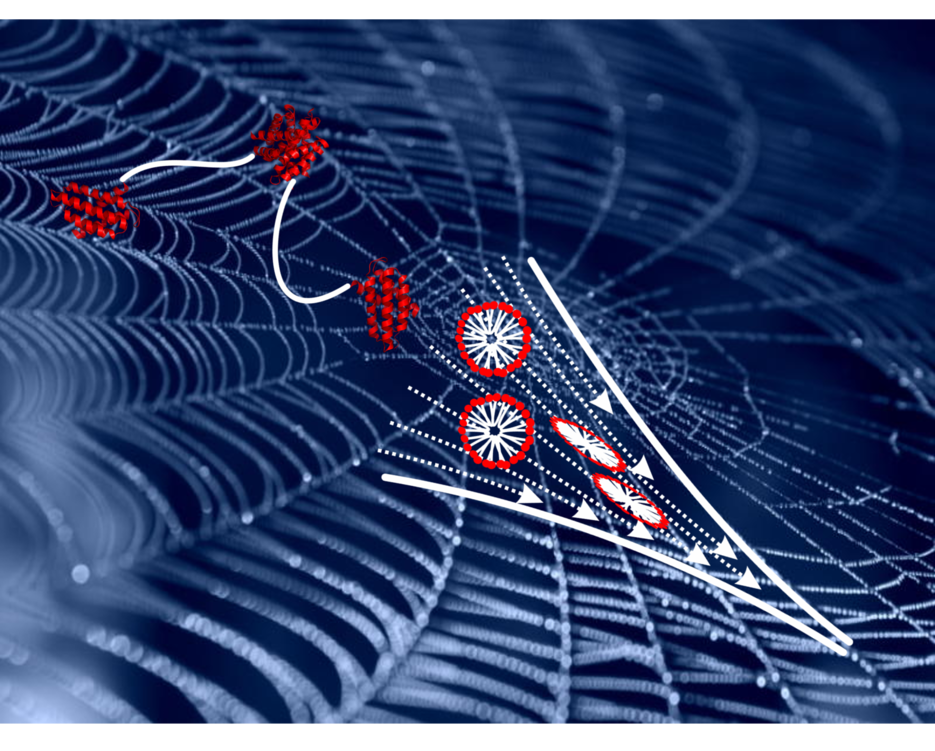 Silk proteins undergo phase and structural transitions in a spider’s spinning gland before they form a solid fibre used to build a web.

Scientists at the Biocenter of the Julius-Maximilians-University Würzburg want to uncover the secrets of this remarkable material and received generous funding for their project.

Proteins are the most important molecular carriers of function in life. They are synthesized as linear chains of amino acids, which adopt unique three-dimensional structures. This process is called protein folding. Small protein domains fold spontaneously without external aid through mechanisms encoded in the amino acid sequence. In the crowded environment of a living cell, however, many proteins require the aid of helper proteins, so-called chaperones, in order to find their correct structure and to avoid misfolding and aggregation. The underlying mechanisms are subject of intense investigation. Their understanding would allow the prediction of protein structure from sequence. Perhaps more importantly, one could understand what goes wrong if proteins fail to fold. Failures in folding can lead to various medical conditions, including neurological diseases and cancer.

Past years witnessed an explosion of the number of atomic-detailed protein structures stored in the protein data bank (www.rcsb.org). These structures provide a basis for our understanding of folding and function. This information, however, is not sufficient. Many proteins are macromolecular machines that change their conformation during function. Furthermore, a significant portion of the human proteome (the whole of human proteins) remains intrinsically disordered, which complicates an understanding of their functional mechanisms.

Hannes Neuweiler's laboratory develops high-resolution fluorescence probes for the detection of the folding and dynamics of selected proteins that are important to human biology or material science. The laboratory applies protein engineering to introduce fluorescence probes and to investigate the contribution of individual amino acid side chains to folding and function. Methods of molecular biology are combined with state-of-the-art fluorescence and complementary protein spectroscopy involving single molecule methods and kinetics in multidisciplinary approaches.

Hannes Neuweiler is lecturer and group leader at the department of Biotechnology & Biophysics at the Würzburg Biocenter. He studied chemistry at the Universities of Frankfurt and Heidelberg, where he received his PhD. As a postdoc at the Institute of Laser Physics and Laser Spectroscopy (University of Bielefeld) he developed fluorescence microscopy for rapid peptide dynamics. As a Marie Curie Fellow (6th EU Framework Programme) in Prof. Alan Fersht's laboratory at the Centre for Protein Engineering in Cambridge (UK) he applied his method developments to research in protein folding and dynamics.

One particular interest of Neuweiler’s laboratory is in proteins that form spider silk. These protein building blocks are called spidroins (from "spider" and "fibroin") and are stored in the spinning glands of web spiders. Spidroins undergo phase and structural transitions during assembly in the spinning duct where the fiber is formed. The resulting material surpasses the mechanical properties of man-made threads and is a focus of current biomimetic material science. To date, many aspects of how spiders synthesize such material of extraordinary toughness remain unclear.

A current project aims at deciphering the molecular architecture of spidroin assembly using high-resolution fluorescence microscopy, a project carried out in cooperation with Prof. Markus Sauer, the head of the department of Biotechnology & Biophysics at the Würzburg Biocenter. The aim of the project is to site-specifically modify engineered spidroins with extrinsic fluorescent labels in order to study the mechanisms of protein assembly and architecture in silk.

Hannes Neuweiler raised funds for this scientific project abroad. In the summer of 2017 his research proposal received excellent ratings during evaluation by the US Army Research Laboratory's funding program, which supports basic research from various disciplines, and received a total of 380,000 USD for the three-year project.