The forests in Europe provide habitat for around 80,000 colonies of wild honeybees. That is why more attention should be paid to preserving the nesting sites for these threatened insects, according to researchers.

Wild honeybees at their nesting place in a tree cavity. (Image: Dimi Dumortier)

So far, wild honeybees have only been observed in northern Poland and Germany (the Hainich forest and the Biosphere Reserve Swabian Alb). Research groups from Germany, France, Italy, and the Czech Republic, led by the JMU, have now asked themselves where there might be other suitable habitats in Europe.

The four teams analysed the tree cavity densities of 106 forest areas across Europe and inferred for the first time an expected population size of estimated 80,000 wild honeybee colonies in European forests. This is reported in the journal Conservation Letters.

Where there are hotspots for wild honeybees

The researchers have also identified the hotspots where wild honeybees find a particularly large number of nesting sites. On the one hand, these are unmanaged forests, for example in national park areas. Surprisingly, hotspots also include forests in which the nesting trees exist not so densely, such as the extensive coniferous forests in Sweden and Finland.

The scientists' conclusion: it is worthwhile to include the conservation of trees with cavities in forest management, even in commercial forests. This is entirely in line with the EU strategy to halt the decline of honeybees and other pollinators. 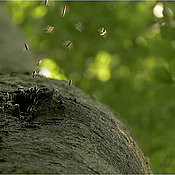